As 2015 is quickly coming to a close, many of us are likely thinking of how we want to start the New Year. After the excess and indulgence that so often accompany the holiday spirit, it can feel especially important to make changes. Many of us, however, can identify with the feeling of failure when our resolutions don’t come to fruition – nothing is more discouraging than having to make the same resolutions year after year.

If this resonates with you, you’re not alone; 50-60% of Canadians make New Year’s resolutions, and yet very few actually stick to them for any appreciable length of time. One survey showed that 19% kept them for less than 24 hours, and 52% for just one month. In fact, according to research from the University of Scranton, just 8% of people actually achieve their resolutions. So for every 100 people who make resolutions, only 8 of them will succeed – leaving the other 92 people unhappy and disappointed.

So how can we account for this low success rate? Well, it could be that people are setting themselves up for failure by not goal-setting in the most effective way. For example, the top three resolutions for 2015 (according to U of Scranton research) were: 1) Lose weight, 2) Get organized, 3) Spend less, save more. While these are undoubtedly good intentions, they are more loose, vague ideas than they are specific goals; how much weight do you want to lose? What does getting “organized” mean? What is “less” or “more” money? Without specificity, these resolutions can feel too overwhelming to tackle, which will lead to procrastination, avoidance, and ultimately abandoning the “goals” altogether. Also, figuring out a plan of how you are going to accomplish these goals is as important as choosing what your goals are.

Using the SMART strategy for setting concrete goals will probably increase the likelihood of achieving them; goals should be Specific, Measurable, Attainable, Relevant, and Time-bound (or Tangible). So, for example, instead of saying you want to “lose weight”, a SMART goal might be to “lose a pound every 2 weeks for the next six months”. And how can you accomplish this? Set up a food and exercise SMART goal as well (for example, perhaps eating a certain amount of calories per day and exercising a certain number of times per week). Or, instead of “getting organized”, figure out what area of your life you feel most disorganized (for example, at work) and set up a plan to start to work on this; for example, “I am going to organize my files by the end of January by spending an extra hour every Friday”. Finally, try not to overburden yourself with too many New Year’s resolutions; prioritize, and choose the one that’s most important to you to start with.

It’s important to recognize that lifestyle change is hard – simply just wanting things to be different is often not enough to go about changing them. Setting yourself up for success by choosing and setting goals effectively will hopefully allow 2016 to be your best year yet! 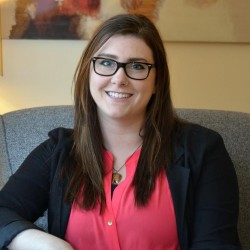 Katherine Wilson is a Halifax Psychologist (Cand. Reg.) at Cornerstone Psychological Services. She works with adults and young adults (18+) looking to overcome mental health obstacles, such as anxiety, depression, and low self-esteem, and also works with couples who are having difficulties in their relationship. Katherine also has a particular research interest in how mental health can impact social, familial, and romantic relationships.